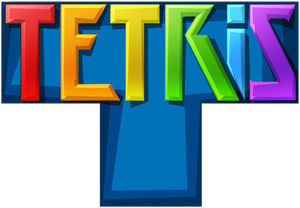 For detailed information about this series, see: Tetris Wiki

Tetris is a series of video games originally designed and programmed by Alexey Pajitnov in the Soviet Union in 1984. The original Tetris game is also the first game in the Tris series, of which Tetris is a sub-series.

The gameplay consists in stacking the falling shapes, called "Tetrominos", each composed of four blocks, trying to leave the least gaps as possible, since if a full line of blocks is created, it is cleared and awards points, while if the blocks reach the top of the field it's Game Over.

Since they're all puzzle games, most of them don't have any kind of storyline, so it might seem not appropriate to consider it a fictional series, however some of them do have a storyline with characters interacting with the tetrominos, such as Tetris Plus, and others feature the Tetrominos as living beings such as Kids Tetris, so we can say that at least at some point, the Tetris series told a story, making it a fictional series.

Many Tetris games have been released in the years, and its difficult to say which is a new game, which is a remake, and which is a port of the same game, as most of them are basically the same game with minor changes or extra modes. Here we listed a total of 97 releases:

Additionally the game Tetris Attack, released in August 1996 for SNES/Super Famicom and Game Boy is often considered part of the series, but since it's actually just the western release of Yoshi no Panepon with the name "Tetris" added to it, we don't consider it a proper entry in the Tetris series.

Three Tetris board games have been released:

Not many official Tetris items have been released. These include:

Despite Tetris being a sub-series of the Tris series, all link pages on this wiki refer to Tetris instead of Tris, because of Tetris being much more popular than Tris in general, because there only are four Tris games that are not "Tetris" and because many people actually consider the other Tris games part of the Tetris series.

Note: aside from direct crossovers, we count type 1 links when Tetrominos appear as real elements in other series, or when characters from other series directly interact with the tetrominos within a Tetris game; if a Tetris game simply has a theme from another series, it is counted as a type 2 link, considering those themes just images of a fictional series within the Tetris game.

Retrieved from "https://fictionalcrossover.fandom.com/wiki/Tetris?oldid=55554"
Community content is available under CC-BY-SA unless otherwise noted.