This page explains the cameos in the Mario comic Super Mario in Die Nacht des Grauens of monsters similar to those from some horror series, and other references to horror series, that are: Child's Play, Friday the 13th, Nightmare on Elm Street, Hellraiser, Evil Dead, Halloween and The Exorcist.

In the special Halloween episode of the Super Mario comic published on the german Club Nintendo magazine, Mario, Link (from the Zelda series) and Kirby live in a huge skyscraper in the heart of Brooklyn, but find out Wario, who is the caretaker of the building, is giving all the apartaments' keys to a demon called Abigor (whose appearance is based on the demon Baphomet, but named after another demon) for him to give to his numerous monster fellows, in excange of manipulating Peach's mind so that she starts loving Wario instead of Mario. After the monsters start occupying the apartments, the three heroes start fighting them using the weapons and serum found in Van Helsing's chest. In the end they're able to get rid of the monsters, but after returning in his apartment, Mario finds out Peach has been transformed into a zombie.

Monsters seen resemble: Chucky from Child's Play, Jason from Friday the 13th, Freddy Krueger from Nightmare on Elm Street and Pinhead from Hellraiser. There also are other classic monsters such as mummies, werewolves and medusas, but being public domain characters they don't count as references to other series.

"Chucky" and "Jason" can be seen in the upper right corner.

The Jason-like monster. Note that he weilds a chainsaw instead of a machete. 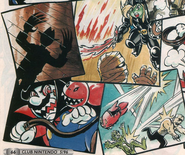 The Pinhead-like monster being burnt by Kirby's fire breath.

In second part of the story, Mario asks Link and Kirby for help since Peach has turned into a zombie, but once they return to Mario's room she's no longer there, and instead is a golden puzzle-die. After trying to open and recompose it, Mario, Link and Kirby are sucked by forniture items and transported into a demonic world. After wandering in a graveyard they find a grimore and Mario tries one of its spells only to have them turn into women (or at least giving them woman-like appearance). After some more wandering they meet two monsters who take them to Abigor where they have to once again fight his monsters, this time with the help of the "Dark Hero Horror" spell that gives them new powers. After finally defeating Abigor's army, Mario is able to find the still zombified Peach and turn her back thanks to the power of their love. In the end Mario uses another spell to return to their normal world, but end up in a town party called "Musikantenstadl", full of people in monster costumes.

The Chucky-like monster returns from the previous part, but there also is a monter resembling Michael Myers from Halloween. Other references are: the "golden die" resembling Lemarchand's box from Hellraiser; The spell book being called "Necronomicon" and being held by a skeletal hand sticking out of a grave with "Ash" written on its stone, referencing the Evil Dead series, which main character is called Ash, and involves the book "Necronomicon"; Kirby's transformation being based on Pinhead from Hellraiser; Zombie Peach saying "Your mother scrubs toilets in hell" referencing a phrase from the movie The Exorcist (your mother sucks cocks in hell).

Mario reading the spell book. The word "Necronomicon" is readable in the front.

Kirby, Mario and Link under the effect of the "Dark Hero Horror" spell. Kirby is notable for resembling Pinhead.

The zombified Peach saying "Your mother scrubs toilets in hell".

Mario's company Nintendo doesn't own any rights over the various horror characters, so they were only able to include slightly modified versions of them in Mario's comic.

Community content is available under CC-BY-SA unless otherwise noted.
Advertisement