Saturday Supercade is an animated television series produced for Saturday mornings by Ruby-Spears Productions. It ran for two seasons on CBS beginning in 1983. Each block included four episodes of different animated series based on popular video games (most of them being arcade games, Pitfall! is the only exception). Being a "container" for other TV shows, Saturday Supercade is not considered a fictional series in this wiki, but the fact that these shows were produced and aired together creates a type 3 link between their respective series. The involved series are: Frogger, Donkey Kong (featuring two different TV shows), Pitfall, Q*bert, Kangaroo (Atari) and Space Ace.

The show's lineup was:

Note that Pitfall! and Q*bert would alternate weekly.

This creates a Type 3 or out-universe link between the Frogger, Donkey Kong, Pitfall! and Q*bert series, and between the Kangaroo (Atari), Donkey Kong, Q*bert and Space Ace series. The Kangaroo (Atari) and Space Ace series are therefore not considered to be connected to the Frogger and Pitfall series, since they aired in different seasons and their shows weren't produced together. 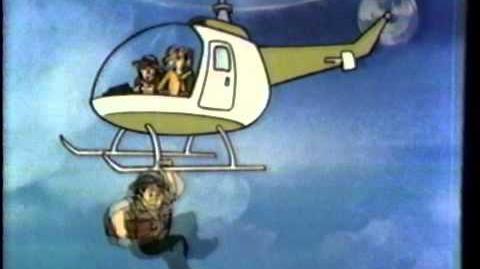 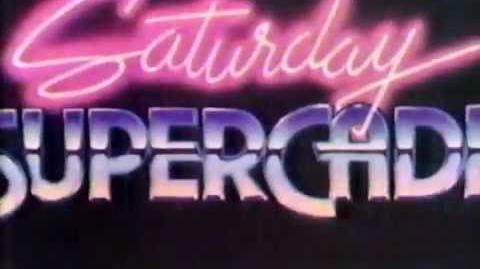 Sometimes, between the end of a segment and the beginning of the next one, a short transition bumper would play, featuring a charachter from the previous show meeting one from the next, kind of like passing the torch. This particular interaction is considered a Type 1 or In-universe link, since it features characters from the two different shows interacting. These are (click on the images for more details):

Ruby-Spears, that produced all Saturday Supercade cartoons, was licensed by the games' respective companies: Konami (Frogger), Nintendo (Donkey Kong and Donkey Kong Junior), Activision (Pitfall!), Gottlieb (Q*Bert), Atari (Kangaroo) and Cinematronics (Space Ace). While they had no problem in the original airing, it seems that all these companies being involved creates a conflict preventing reruns and home releases.

Retrieved from "https://fictionalcrossover.fandom.com/wiki/Saturday_Supercade_links?oldid=13698"
Community content is available under CC-BY-SA unless otherwise noted.