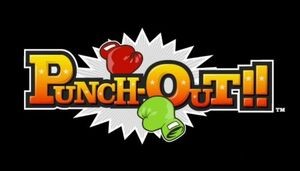 For detailed information about this series, see: The Punch-Out!! Wiki

Punch-Out!! is a series of boxing games by Nintendo starring the young boxer named Little Mac. The first episode in the series was released in 1984, and the last was released in 2009. In these 25 years the series has been rebooted two times, so it can be divided in three sub-series.

A series of Punch-Out!! comics have been published on issues 5 and 9 of Nintendo Comics System.

A series of action figures and a series of trading cards based on the NES game were released in 1989.

Note: games with a gameplay similar to Punch-Out!! such as Teleroboxer and Wade Hixton's Counter Punch are not considered linked to this series, unless they feature specific references.

Retrieved from "https://fictionalcrossover.fandom.com/wiki/Punch-Out!!?oldid=48973"
Community content is available under CC-BY-SA unless otherwise noted.