For detailed information about this series, see: R.O.B. on Nintendo Wiki

The Robot series is a video game series by Nintendo that includes the Famicom Robot (R.O.B.) accessory for the NES and the two games compatible with it: Robot Block (Stack-Up) and Robot Gyro (Gyromite).

The robot accessory is designed to receive informations from the game through flashing colors on the screen, and each game comes with original pieces to add to the robot.

The accessory has been released in Japan as Family Computer Robot or Famicom Robot on July 26, 1985 simultaneously with the first game in the series, Robot Block.

The second game, Robot Gyro has been released in Japan on August 13, 1985.

The robot accessory and its two games have been released in North America simultaneously on October 18, 1985, but the accessory was renamed R.O.B., short for Robotic Operating Buddy, and the two games Stack-Up and Gyromite. All three were released in Europe in September 1986.

Note that while the games were renamed in the international release, they're still identified as the "Robot series" on the game's box, and their on-screen name was left unchanged.

Regarding the games' universe, it's stated that the R.O.B. was created by Professors Hector and Vector, characters from the games, and they also command it during gameplay, so the robot itself and the events from the games are supposed to exist in the same fictional universe, in some way. 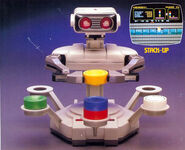 R.O.B.'s Gyromite configuration.
Add a photo to this gallery

Retrieved from "https://fictionalcrossover.fandom.com/wiki/Famicom_Robot?oldid=52144"
Community content is available under CC-BY-SA unless otherwise noted.